Aram Manoukian was one of the main protagonists in the foundation of the first independent Republic of Armenia in 1918.

Born as Sergei (Sarkis) Hovhannisian in the village of Zeyva (nowadays David Bek, district of Kapan in Siunik) in 1879, he graduated from the Diocesan School of Shushi, in Gharabagh, one of the main Armenian schools in the region. He joined the ranks of the Armenian Revolutionary Federation when still a student. He was sent to Baku in 1901 as an activist. After a year spent in Kars (1903-1904), he settled in Van, where he developed his political activities for more than ten years, with a very short interruption. He had already acquired the pseudonym of Aram Manoukian and would later be known simply as “Aram of Van.” 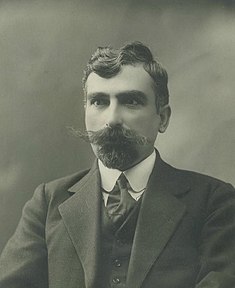 He became one of the main leaders of the party in the region of Van and the soul of the resistance of the city against the Turkish orders of deportation in April 1915. After the deliverance of the Armenian population by the arrival of the Russian troops and the Armenian volunteers, Aram was named governor of Van until the unexpected retreat of the Russian forces two months later.

He was sent by the Armenian National Council to Yerevan in December 1917 as plenipotentiary representative to organize the resistance against the Turkish offensive. On January 5, 1918, on the eve of Armenian Christmas, Aram decreed a general mobilization. He declared: “In these conditions, our people can make miracles. I have often had the opportunity to realize that the sense of duty of our villagers is authentic. It is a sign of awareness. One call by the National Council is enough for him to leave his home and to rush to arms, when there is nothing that compels him to do so. At the time, the mobilization by the Russian government was always executed on the force of terror.”

He took severe measures to stabilize the situation as head of the Special Committee, and was proclaimed dictator during an assembly of representatives of the population of Yerevan in March 1918.

His organizing skills and his unflinching patriotic fervor led the Armenian population of the plain of Ararat to stand up against the invaders: “We are alone and we can only rely on our forces,” he proclaimed, “both to defend the front and to establish order inside the country.” He was the driving force behind the successful outcome of the battles of Sardarabad and Pash Abaran that, together with Gharakilise, ensured the proclamation of the independence on May 28, 1918.

Afterwards, he practically led the country until July 23, 1918, when the government of the Republic, created in Tiflis and headed by Prime Minister Hovhannes Kajaznuni, arrived in Yerevan. He was named Minister of Interior and held that position until his death. After the assassination of Kachatur Karjikian, Minister of Jobs and Health, he was also acting minister from November 15 to December 13, 1918.

Aram Manoukian died on January 29, 1919, from typhus that he contracted when visiting the camps of refugees from the genocide. His biographer, Arshaluys Astvatzatrian, has left the following description of his burial:

“The interment of Aram was an expression of great popular mourning. Thousands of people had come to give their final respect to the man to whom they had entrusted their fortune in the hardest days. I know what Aram was for Yerevan, but anyway, when we took out the coffin from his home, what I saw outside woke me up from the impact of the great loss and amazed me: wherever you looked, it was a human sea, in the street, on the roofs, windows, balconies, everything was occupied. The whole city, old and young, had come out to the street. From the church of Peter and Paul until the cemetery, the funeral carriage was empty: they were carrying the coffin on their shoulders and the carriers were mainly the Armenians from Van, who were particularly fond of Aram. In front of the A.R.F. House there were funeral speeches. Nikol Aghbalian’s words were superb and unforgettable. Hovhannes Kajaznuni and Abraham Gulkhandanian spoke at the cemetery. That day, the capital of Armenia was in mourning . . .”

Aram Manoukian’s tomb is currently at the City Cemetery of Yerevan (Tokhmakh-Gol). The street where he died was renamed Aram Street after the collapse of the Soviet regime.
Posted by Vartan Matiossian at 12:00 AM