The last week of May 1918 was a crucial moment in Armenian history. The three battles of Sardarabad, Gharakilise and Pash Abaran, from May 21-28, stopped the progress of the Turkish invading army in Eastern Armenia, which was almost at the doors of Yerevan and Etchmiadzin.

Simultaneously, the Transcaucasian Federative Republic, founded in April 1918 by the three main peoples of the region (Armenians, Georgians, and Tatars) with its capital in Tiflis, was crumbling. Georgians and Tatars started separate negotiations with Germans and Turks. As a result, on May 26, Georgia declared its independence with German protection, and the next day, Tatars declared the independence of Azerbaijan under Turkish auspices. Finally, on May 30, the Armenian National Council, the highest Armenian authority in the region, declared independence, retrospective to May 28, when the Transcaucasian Federative Republic had been formally dissolved. The situation was so uncertain that the declaration of independence actually did not contain the word “independence.” Communications between Tiflis and Yerevan were cut and there was no information about the victories in the battlefront. The historical text said: 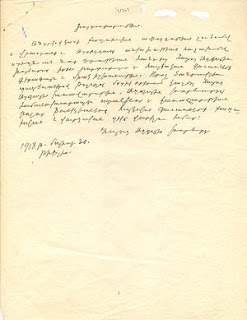 The first Republic of Armenia was officially born.

Posted by Vartan Matiossian at 12:00 AM