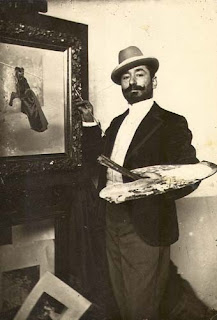 A multifaceted artist and intellectual, Vardges Sureniants is considered the founder of Armenian historical painting. He was born in Akhaltskha (Akhaltsikhe), in modern-day Georgia, on February 27, 1860. His father Hakop was a priest who taught religious history. After their family moved to Simferopol, in Crimea, in 1868, his father was appointed to the Armenian diocese in Moscow. This gave young Sureniants an opportunity to study at the prestigious Lazarian School from 1870-1875.
From early on, the future artist showed his interest and aptitude for the arts. He furthered his education at the department of Architecture of the Moscow Art School (1875-1878). He went to Munich (Germany), and after a year at the department of Architecture of the Academy of Fine Arts (1879), he made a crucial shift and studied at the department of Painting for the next five years until 1885.
Sureniants became interested in caricatures and sketches during his years at the Lazarian School. In Munich, some of his caricatures were published in the Fliegende Blätter magazine.
The painter traveled to Italy in 1881 and visited Venice, including the island of San Lazzaro. In the library of the Mekhitarist Congregation he studied Armenian fine arts and manuscripts. In 1883 he published his first article, about Armenian architecture, in the daily Meghu Hayastani of Tiflis.
After his return to Russia, in 1885–87 he traveled to Persia as a member of the scientific expedition led by Valentin Zhukovski, a professor of Oriental Studies at the University of Saint Petersburg. They visited the cities of Tabriz, Tehran, and Shiraz, and Sureniants spent several months in Ispahan. Afterwards, he translated William Shakespeare’s play Richard III and sent it to the celebrated Shakespearean actor Bedros Atamian (1849-1891), in Constantinople, to have it produced there. He would later translate Midsummer’s Night Dream and some of Shakespeare’s sonnets. He taught painting and general art history at the Gevorgian Seminary of Holy Echmiadzin in 1890-1891.
After 1892 Sureniants participated actively in the artistic, theatrical, and social life of Moscow, Saint-Petersburg, Tiflis, and Baku. He visited Ani and Lake Sevan, and became familiar with historical monuments and everyday customs of Armenian rural life. He also studied the Armenian illustrated manuscripts in the repository of the monastery of Holy Echmiadzin. He traveled to France and Spain in 1897-1898.
He has been categorized as a realist painter in his representations of landscapes and historical events, and played an important role in the revival of the Armenian past through art. His paintings would reflect the aesthetic knowledge acquired during his studies and his travels. In 1901 he held a solo exhibition of his works in Baku, which would be his only exhibition in his lifetime. Afterwards, he moved to St. Petersburg, where he worked as a stage decorator until 1915. 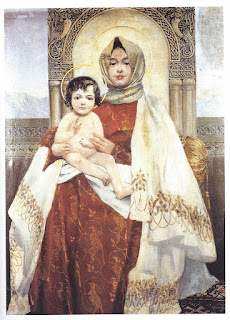 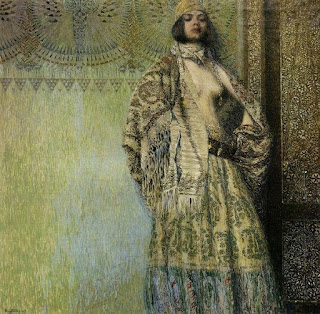 Sureniants was also known for his illustrations of famous literary works, such as Ferdowsi’s Shahname, Alexander Pushkin’s The Fountain of Bakhchisaray, Oscar Wilde’s fairy tales, and works by Belgian poet Georges Rodenbach and Armenian poets Smbat Shahaziz and Alexander Tzaturian.
His famous painting “Salome”(above, left) was included in the exhibition dedicated to the 100 th anniversary of the Academy of Fine Arts of Munich (1912). In 1915 he returned to the Caucasus, and in 1916 he founded the Armenian Artists’ Society, together with Yeghishe Tateosian, Martiros Sarian, and Panos Terlemezian. He also made many paintings of survivors of the Armenian Genocide.


In 1917 Sureniants moved to Yalta, in Crimea, where he was commissioned to draw the decorations for the newly built Armenian cathedral. He decorated the altar (above, right), walls, and dome of the church. However, he suffered a grave illness during his task. He passed away on April 6, 1921, and was buried in the courtyard of the cathedral he had contributed to decorate.
Posted by Vartan Matiossian at 10:53 AM 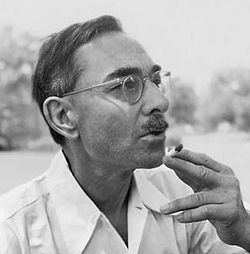 His is not a household name, but Ervand Kogbetliantz was an accomplished mathematician and inventor who lived and taught in the United States from the 1940s-1960s.

Ervand George Kogbetliantz was born on February 21, 1888, in the old Armenian community of Nor Nakhichevan (Novo Nakhichevan), in the Northern Caucasus, now part of Rostov-on-the-Don (Russia). We do not know anything about his early years, but it appears that love for mathematics came to him naturally. He studied mathematics at the University of Paris (1907) and graduated from the School of Mathematics at Moscow University (1912), where he taught from 1912-1918. In 1918 he invented one of the oldest forms of three-dimensional chess. He returned to the Northern Caucasus, and taught at the Polytechnic Institute of Ekaterinodar (nowadays Krasnodar) from 1918-1920.

It appears that the newly-opened University of Yerevan, in the fledgling Republic of Armenia, attracted him, and he taught there for a few months. A couple of weeks after Armenia became a Soviet republic, on December 17, 1920, Commissar of Education Ashot Hovhannisian issued a decree about the restructuring of the university, and established an advisory committee presided by Kogbetliantz, which was entrusted with the task.

In 1921 Kogbetliantz left Armenia for France. He obtained a doctorate in mathematics from the University of Paris in 1923. He taught at the Russian High School of Paris in the 1920s and was president of the Union of Geophysicists from 1927-1933.

Kogbetliantz received an invitation from Reza Shah to organize the chairs of mathematics and celestial mechanics at the University of Tehran in 1933, which he also directed until 1938. His efforts were rewarded with the Elmi Order, the highest of Iran.

In 1939 he returned to Paris as a researcher for the National Center of Scientific Research and kept that position until 1942. As many other scholars, he left occupied France and crossed the Atlantic. He taught mathematics at Lehigh University (1942-1944) and then at the New School of Social Research (1944-1954) and Columbia University (1946-1953). Meanwhile, he was a consultant for Standard Oil (1945-1946) and then for IBM (1953-1964). He became a member of the Rockefeller Institute in 1956.
His mathematical work was mainly on integral equations, the theory of orthogonal polynomials, numerical analysis, gravity and magnetic theories, etcetera. He formulated an algorithm for singular value decomposition which bears his name. He authored close to one hundred scholarly articles and books, some of them in translation ( Fundamentals of Mathematics from an Advanced Viewpoint, 4 volumes, 1968; Handbook of First Complex Prime Numbers, 1971, with Alice Krikorian). He also invented precision devices to measure Earth magnetism, and various analogical and gyroscopic devices. Kogbetliantz was one of the co-creators of the IBM 7030, also known as Stretch, the first transistorized supercomputer created by IBM, which was on sale from 1961-1964.

In 1952 Kogbetliantz’s three-dimensional chess received much media attention, and was described in several articles in Time, Newsweek, New Yorker, and Life, including pictures of his chess set. At his death, he was working with world champion Bobby Fischer on a game of chess for three people.
He retired in 1964 and moved back to Paris, where he passed away on November 5, 1974.
Posted by Vartan Matiossian at 10:52 AM

Rafael Ishkhanyan was a prominent expert of Armenian language and book history, and also an engaged intellectual in Soviet times and the first years of the second independence.

He was born on March 9, 1922, in Yerevan. His parents, Avetis Kirakosian and Haykanush Ishkhanyan, who had become Bolshevik revolutionaries in 1919, then divorced. Rafael lost his mother at the age of eight, and grew up with his maternal uncle and grandmother, adopting their last name. In 1937 he lost his father, who was shot during the Stalin purges. (He would later marry Burakn Cheraz-Andreasyan, whose parents, Vahan Cheraz, a founder of the Armenian scout movement, and Vartanush were also shot by the Soviet regime in 1928 and 1937.) 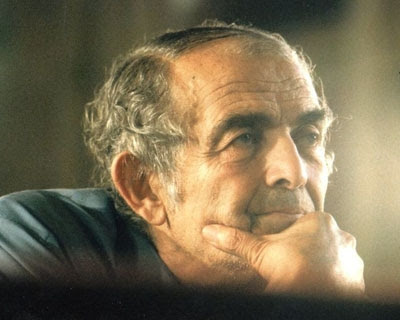 In 1939 Rafael Ishkhanyan entered the Faculty of Philology in Yerevan State University. However, he interrupted his studies in 1940 when he was drafted by the Soviet army. He was wounded in World War II, fell prisoner to the German army, and after being released, he returned to the battle front. After the end of the war, he was discharged and returned to his studies. After finishing university in 1949, he left for Moscow, where he also graduated from the Institute of Library Studies in 1954.

From 1955-1963, Ishkhanyan worked in the field of library studies. He entered the Public (now National) Library where he worked as a senior librarian, head of subdivision, and head of division, and also worked at the Matenadaran as director of the scientific library. He also taught at the distance course of the Pedagogical Institute of Armenia. In 1962 he defended his first Ph.D. dissertation about Axel Bakunts (1899-1937), one of the prominent writers killed during the purges. The following year, he entered his alma mater, where he would spend the next thirty years (1963-1992) teaching at the chairs of Armenian language and history of the Armenian language. His main subjects were Armenian contemporary language, dialectology, and history of the language of Armenian literature. He would defend his second Ph.D., “History of the language of modern Armenian literature,” in 1973, and earn the title of professor in 1978. In the late 1970s, Ishkhanyan published some of his major works, Bakunts’ Life and Art (1974), History of the Armenian book (vol. 1) (1977), History of the language of Eastern Armenian poetry (1978), and The New Literary Armenian in the Seventeenth-Eighteenth Centuries (1979).

From the 1960s, two controversial subjects attracted Ishkhanyan’s attention, who published his views whenever possible: the origin of the Armenian people, which he considered autochthonous to the Armenian Plateau, and the restoration of traditional orthography (in replacement of the “reformed” orthography imposed in 1922 and 1940). He would ardently defend his views until the end of his life. Not by chance, his first books published on the subject appeared in the Diaspora, because the views expressed did not make it possible to publish in Soviet Armenia: Our Fundamental Orthographic Question (1983) and The Origin and Earliest History of the Armenians (1984).

When the Karabagh movement started in 1988, Ishkhanyan was also at the forefront of the national issues that were attached to the claims for Karabagh, and particularly the status of the Armenian language in Armenia. He also wrote extensively about political issues, including Armenian-Turkish relations ( The Law of Excluding the Third Force, 1991). He became the editor of “Lousavorich,” a newspaper entirely published in traditional orthography. Two books on his views on Armenian origins were finally published in 1988 ( Questions on the Origin and Earliest History of the Armenian People ) and 1989 ( Armenian Native Words and Earliest Loanwords ). In the 1980s he had serialized a history of the Armenian people for children and teenagers, Armenian Illustrated History, of which the first volume appeared in 1990 (two more volumes would be posthumously published in 1997 and 2004). He published a total of forty books in his life and countless articles.

In 1991 Ishkhanyan was elected a deputy to the Supreme Council (the forerunner to the National Assembly) of Armenia and designated director of the National Library of Armenia. He passed away on February 6, 1995, in Yerevan. The school No. 153 of the Armenian capital now bears his name.
Posted by Vartan Matiossian at 10:48 AM