Avetis Aharonian, known as the “singer of Armenian sorrow,” was one of the popular names of Eastern Armenian literature in the first half of the twentieth century. He was equally noted for his active participation in the revolutionary movement and the first Republic of Armenia.
Aharonian was born in 1866 in the village of Igdir Mava, in the district of Surmalu, which would be lost to Turkey after the Moscow and Kars treaties of 1921. He graduated from the Gevorgian Lyceum of Etchmiadzin in 1886, and taught for a few years. He became a member of the Armenian Revolutionary Federation in the 1890s and in 1897 he departed to Europe, where he graduated from the literature course of the University of Lausanne (Switzerland) in 1901. His first stories on Western Armenian emigrants and the movement of national liberation, published in the A.R.F. organ Droshak, attracted the attention of the readers. His most famous stories on these subjects are collected in the volume On the Road to Freedom (1908) and would make him the successor to novelist Raffi (1835-1888) as an inspiration for the Armenian liberation movement.
In 1902 he returned to the Caucasus and became the principal of the Nersesian Lyceum of Tiflis from 1907-1909. The persecution started by the Russian government against revolutionary parties, including the A.R.F., targeted him and he was arrested and jailed for two years. Due to his poor health, he was liberated and went first to Constantinople and then to Europe for treatment. He returned to the Caucasus before World War I, and in 1917 he was elected president of the Armenian National Council in Tiflis. After the independence of Armenia, he was elected a Parliament member and then president. He went to Paris in 1919, where he headed the Delegation of the Republic of Armenia that signed the Treaty of Sevres in 1920. He also participated in the conventions of London (1921) and Lausanne (1922-1923). He wrote down his reflections on the Armenian Cause in a book called From Sardarabad to Sevres and Lausanne (1943).
He had to stay abroad after the establishment of the Soviet regime in Armenia, where his works were banned. Besides his political activities, Aharonian continued writing a steady flow of stories, novellas, literary and political studies, memoirs, travelogues. Symbolist in some of his works and romantic in some others, his emotional style appealed to the heart of the masses and made him particularly cherished among Armenian readers throughout the world, even after his death.
It may be said that he fell on the line of duty. He was one of the keynote speakers at an event organized by Hamazkayin in Marseilles on February 11, 1934, before an audience of 2,000 people. His speech started with the following paragraph: “Armenian people, you have to know that this is a waiting situation. You have to believe that you will return to the land of your ancestors, your braves. We have not come here to stay; we have come here to return...”  He had just reached the fourth paragraph of his speech, when he was silenced by a stroke. He lived for the next fourteen years in Marseilles, unable to speak or write.
He passed away on April 20, 1948, and was buried in the cemetery of Père Lachaise, in Paris. His collected works were published in 10 volumes in Boston and Venice between 1947 and 1951.
After the independence of Armenia, his name was returned to the homeland. His works have been published over the years and a street in Yerevan bears his name.
Posted by Vartan Matiossian at 12:00 AM

The first Armenian movie, called “Armenian Cinema” (Հայկական սինեմա), was filmed in 1912 in Cairo (Egypt). In the same year, it was shown in several Armenian communities of the United States. But the first and biggest Armenian studio was created eleven years later, in 1923, in Yerevan.
The Council of Popular Commissars (Council of Ministers) of Soviet Armenia adopted a decision on April 16, 1923, to nationalize all private cinemas and to found the company “Petkino” (State Cinema), which was shortly thereafter renamed “Haypetfotokino” (Armenian State Photo Cinema). The board of the company was directed by Daniel Dznuni. The company was renamed “Haykino” in 1928 and then Yerevan Film Studio (1937).
The first film was a documentary, “Soviet Armenia” in 1924 (directed by I. Kraslavski). It was followed by the first feature film, H. Bek-Nazarian’s Namus (The Honor), a year later. A series of silent films by Bek-Nazarian, the pioneering director of Armenian cinema, and others brought recognition to Armenian productions within the Soviet Union. The beginning of the “talkies” was marked by the production of the masterpiece of Armenian cinema, Pepo (1935), also directed by Bek-Nazarian. It followed a long period of historical films, before and during World War II, including Zangezur (1938), by Bek-Nazarian, which won the USSR State Prize. However, Lev Atamanov filmed the first Armenian cartoon, The Dog and the Cat (1938), during this period.
After a period dominated by the production of documentaries, feature films resumed in 1954, and the period of maturity was reached in the 1960-1980s, when some of those films even made their way to the international market. The company was renamed Armenfilm in 1957 (it was known in Armenian as Hayfilm) and the studios were baptized with the name of Hamo Bek-Nazarian in 1966. Some of the more remarkable films of this period were: “Hello, It’s Me” (Frunze Dovlatyan, 1965), “Triangle” (Henrik Malian, 1967), “We Are Our Mountains” (Henrik Malian, 1969), “The Color of Pomegranate” (Sergei Parajanov, 1969), “Nahapet” (Henrik Malian, 1977), “A Piece of Sky” (Henrik Malian, 1980), “White Dreams” (Sergei Israelian, 1984), “The Tango of Our Childhood” (Albert Mkrtchyan, 1985), “Nostalgia” (Frunze Dovlatyan, 1990), and others.
After the fall of the Soviet Union, Armenfilm entered a period of decline and was privatized in 2005 to Armenia Studios LLC (a branch of CS Media Holding).

Henrik Malian's "The Tango of Our Childhood" (Մեր մանկութեան տանգոն), 1985.
Watch the entire film by clicking the above link.
Posted by Vartan Matiossian at 12:00 AM 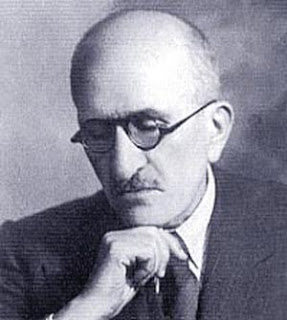 Poet and public figure, Vahan Tekeyan belonged to the surviving generation of the Armenian Genocide and during the last three decades of his life he influenced an entire generation.

Tekeyan was born in Constantinople on January 21, 1878. He was the youngest of five children, fourteen years younger than his closest brother. His father passed away when he was eleven. He attended Nersesian, Berberian, and Getronagan schools, but did not finish his secondary schooling and was self-taught for the most part.

He went to work with an insurance firm as a secretary at the age of sixteen. Two years later, in 1896, he was transferred to Liverpool, England, just before the massacres of Armenians in Constantinople ordered by Sultan Abdul Hamid II. In 1897 he was sent to Marseilles, where he stayed for four years, and then to Hamburg (Germany). In 1901 he published his first volume of poetry, Burdens, in Paris. In 1904 he was in Egypt and the following year he began publishing the literary monthly Shirag with Mikayel Gurjian (1878-1965). After the restoration of the Ottoman Constitution in 1908, Tekeyan returned to Constantinople and resumed publication of Shirag for a short while. He was elected a member of the National Church Council. In 1911 he visited Armenia for the first time for the election of Catholicos of All Armenians Gevorg V Sureniants.

He published his second book, Miraculous Rebirth, in 1914, which was received with unanimous praise. It was on the eve of World War I, and Tekeyan would escape the fate of Armenian intellectuals during the genocide by chance. He was sent to Jerusalem to settle a church dispute as a representative of the Armenian National Assembly. At the outbreak of the war, he went to Cairo and followed the developments from there.

Tekeyan had been originally a member of the Social Democrat Hunchakian Party, and after its split in 1896 he entered the Reorganized Hunchakian Party. He went back to Yerevan in 1919 to lead negotiations on behalf of the Armenian National Delegation headed by Boghos Nubar Pasha with representatives of the Republic of Armenia. Then he participated in the Armenian Congress held in Paris in the same year.

He published his third book in 1919 (From Midnight to Dawn). The next year he returned to Constantinople after an absence of six years. In 1921 he was instrumental in the fusion of four parties that gave origin to the Democratic Liberal Party (Ramgavar Azadagan). Tekeyan became the editor of its organ, Joghovurti Tzayne, and in 1922, together with four other noted intellectuals (Gostan Zarian, Hagop Oshagan, Shahan Berberian, and Kegham Kavafian), founded the short-lived literary monthly Partzravank. From 1921-1922 he was also principal of Getronagan School.

After the occupation of Constantinople by Kemalist forces, Tekeyan left the city, and went to Bulgaria, Greece, Egypt, and Syria to supervise Armenian refugee and orphan care. He was particularly helpful to one of those orphans, future Armenian American writer Leon Surmelian (1906-1998), and encouraged and collected his Armenian poetry, which he published in a book in 1924, Joyful Light.

From 1926-1932 he became editor of Arev, his party’s publication in Cairo. He moved to Paris, where he published his fourth collection of poetry, Love (1933). After a stint at the Melkonian Educational Institution in 1935-1936, he became the founding editor of the daily Zartonk of Beirut in 1937. Then he returned to Cairo to resume editorship of Arev.

He published his last two books in 1943 (Song of Armenia) and 1944 (Odes). His poetry, be it lyrical, patriotic, or philosophical, would always reflect the sobriety of its author. By the time of his death, some of his poems had become classics, and had earned him the title of “Prince of Armenian poetry.” His literary style had already created a numerous following, which would be active for several decades after him.

After a long life of service, Tekeyan died in Cairo on April 4, 1945. The Tekeyan Cultural Association, founded in 1947, bears his name.
Posted by Vartan Matiossian at 12:00 AM