Posted by Vartan Matiossian at 8:00 PM

Posted by Vartan Matiossian at 9:54 PM

Coming from a family of musicians, Grikor Suni was a relevant name in Armenian music in the beginning of the twentieth century, and had an important activity in the United States during the last two decades of his life.

Grikor Mirzaian Suni was born on September 10, 1876, in the village of Getabek, in the region of Gandzak (nowadays Ganja, in Azerbaijan). At the age of two, he and his family moved to Shushi, the capital of Gharabagh. He enrolled in 1883 in a parish school and lost his father in the same year.
He studied from 1891-1895 at the Gevorgian Seminary of Etchmiadzin, where he was a classmate of Gomidas Vartabed, whom he befriended. After graduation, he organized a polyphonic choir and gave a concert of popular songs collected and arranged by him.
After pursuing private lesson in St. Petersburg from 1895-1898, he received a scholarship to attend the state conservatory, majoring in music theory and composition. He had two famed Russian composers, Nikolai Rimsky-Korsakov and Alexander Glazunov, among his teachers. Meanwhile, he was hired as choir director of the local Armenian church, and prepared arrangements of religious music. He graduated in 1904 and published a collection of popular songs in the same year.
In the late 1890s, Suni entered the ranks of the Armenian Revolutionary Federation, where he remained until 1910. He composed the lyrics and music of the party’s anthem, Mshag panvor.
In 1905 Suni returned to the Caucasus, and taught music at the Nersisian School of Tiflis until 1908. In 1906 he wrote the operetta Aregnazan, based on lyrics of writer Ghazaros Aghayan, which was staged by the Armenian Theatrical Company of Tiflis.
In October 1908, fearing political persecution in Russia, Suni escaped to the Ottoman Empire with his family. He first settled in Trebizond (Trabzon), and organized concerts of Armenian choral and orchestral music in the region. In 1910 he moved to Erzerum, where he taught at the Sanasarian School during the next four years. He also continued collecting folk songs and dances, and organizing choirs.
At the breakout of World War I, the composer moved back to Tiflis, where he continued teaching and directing. He was also one of the founding members of the Society of Armenian Musicologists. After a sojourn in Tehran (1919-1920), he returned to Tiflis, but his poor health led him to move to Constantinople (1921), where he taught music and choral singing at several schools, and conducted a choir. Months after the Ottoman capital had been occupied by the Kemalist forces, in September 1923 Suni and his family arrived in the United States and settled in Philadelphia.
During the next decade and a half, the composer, who had adopted a pro-Soviet outlook as a result of his ideological affinities, participated actively in the artistic life of the Armenian American community, particularly on the East Coast. He also continued composing. A collection of choir music was published in Yerevan, in 1935.
Grikor Suni passed away in Philadelphia on December 18, 1939. Several fascicles containing songs by him were posthumously published in the 1940s in Philadelphia. One of his grandsons is historian Ronald Grigor Suny, professor of History at the University of Michigan.
Posted by Vartan Matiossian at 3:31 PM 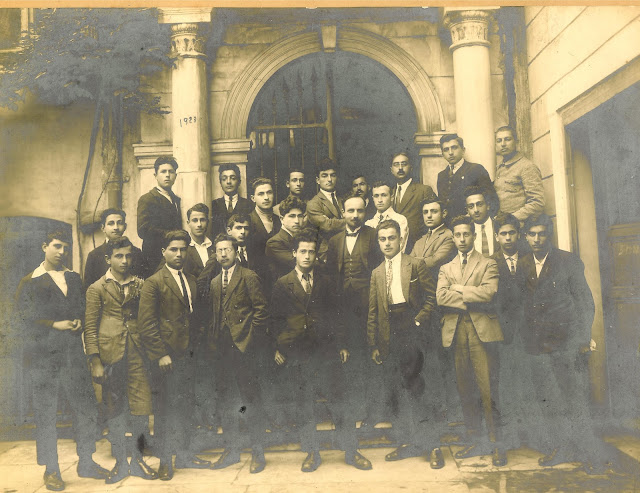 The Getronagan (Central) High School was a project of the Armenian community of Constantinople, which aimed at providing education with a productivity level that would be above the standards of foreign schools.

The initial plan was to establish a secondary school in the neighborhood of Ortaköy. The first board of trustees was formed in the beginning of 1885.

The school opened on September 1, 1886, with 64 students as first year students. The opening ceremony was led by Catholicos of All Armenians Makar I (1885-1891) and Armenian Patriarch of Constantinople Harutiun Vehabedian (1885-1888). The five-year program of the school was divided into two phases. In the first three years, they taught Religion, Armenian, Turkish, French, History, Geography, Mathematics, Science, Law, Commerce, Health, Stenography, and Painting. In the last two years, the last four were replaced by Political Economy, Accounting, and Pedagogy. The first faculty included some noted names in the Armenian intelligentsia, such as educator Reteos Berberian, writers Minas Cheraz, Hovsep Shishmanian (Dzerents), Tovmas Terzian, Srabion Hekimian, historian Madatia Karakashian, Gabriel Noradungian (future Minister of Foreign Affairs of the Ottoman Empire), etcetera. 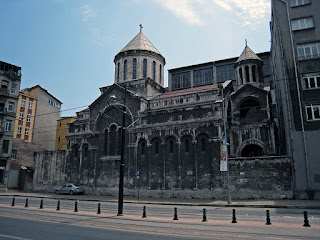 The school population had grown to 148 students when the class of 1891 (18 students) graduated.  The first principal was Minas Cheraz, who held the position until 1889. He was succeeded in 1890 by Harutiun Mosdichian, who introduced changes to the educational system, such as the opening of the departments of Science and Literature. His tenure ended in 1896, when the school was closed. It was reopened in 1897, with an additional elementary school that served as free preparatory school for those students coming from the provinces.

After a period of decadence from 1897-1909, coincidental with the tyrannical period of Sultan Abdul Hamid II, the Getronagan School recovered its past brilliance under principals Mardiros Nalbandian (1909-1913), Kegham Kavafian (1917-1927), and Bedros Adruni (1927-1933).  Intellectuals like Gomidas Vartabed, Levon Shant, Vahan Tekeyan, Gostan Zarian, and others taught in the school. In 1929 the primary school was closed and replaced by a one-year preparatory section. From 1935-1951 the lyceum section of another venerable school, the Essayan School, was joined with the Getronagan.
The school had famed teachers, but also remarkable graduates, including linguist Hrachia Ajarian, writers Arshag Tchobanian, Misak Medzarents, Vahan Tekeyan, Yerukhan, Hagop Siruni, Nigoghos Sarafian, Aram Haigaz, actor Armen Armenian, Armenologist Haig Berberian, photographer Ara Guler, pianist Sahan Arzruni.

The Getronagan Alumni Union was founded in 1947 and organizes cultural activities, which also contribute both materially and morally to the welfare of the school. It has branches in France, the United States, and Canada. As of 2001, the Getronagan High School had 182 students.
Posted by Vartan Matiossian at 9:59 AM