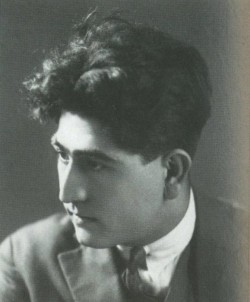 Nigoghos Sarafian is considered the first poet of the Diaspora in the sense that his creation reflected, from his first book, the aesthetic renewal and the issues of identity and rupture with the past that characterize diasporan sensitivity. He was a leading representative of the generation of French Armenian writers known as the “Paris school.”

Sarafian was born on April 14, 1902, aboard a ship going from Constantinople to Varna (Bulgaria). His parents had emigrated from the village of Lichk, in the district of Akn (Kharpert), after its population was decimated in the massacres of 1896. In Varna, Nigoghos—the youngest child in the family—first went to the “Jierjian” and National Armenian schools, and then to the St. Michel French lyceum. During World War I, he left with his elder brother first to Romania and then started a wandering life from Bucharest to Galatz, and then to the Russian cities of Odessa, Rostov, and Novorossisk until the Russian Revolution started. He crossed Romania on foot and returned to the family home in Varna. However, after the war ended, like many other Armenians, in 1919 the future writer moved to Constantinople, where he continued his education at the famed Getronagan School with such important writers as Hagop Oshagan and Vahan Tekeyan as teachers, and graduated in 1922.

Like several of his future colleagues in Paris, he rushed to flee Constantinople before the Kemalist army occupied the Ottoman capital in November 1922. After spending a few months in Bulgaria and Romania, in 1923 he settled in Paris, where he lived for the rest of his life. After trying different jobs, he became a typesetter. He would personally type several of his books.

His first book, The Conquest of a Space (1928), already revealed the originality of his poetry and his departure from the aesthetic canon that ruled over Western Armenian poetry. He would join the group of “Menk” gathered around the homonymous journal from 1931-1933, while contributing poetry and essays to the main literary journals of the Diaspora. His thoughtful style, however, would remain far from the emotional outbursts of Shahan Shahnour and the passionate rebukes of Vazken Shoushanian. After his second book of poetry, 14 (1933), he published the short novel The Princess (1934), and would incursion in the novel with several works published in various journals during the 1930s and 1940s, which were never turned into books.

His poetry, published in limited editions, would not gain public favor, because it was ahead of his time, as the volume Ebb and Flow (1939) showed. Armenian institutional culture ignored him for decades, especially because his poetry was hardly understandable to traditionalist circles in the Diaspora and incompatible with the official criteria of Soviet Armenia. It combined elements reflecting European literary movements with the natural function of thinking that it is part of poetical art, which led to his classification as a “cerebral” poet, somehow leaving him on the margin of the literary canon.

Sarafian published two more volumes of poetry in his lifetime, Citadel (1946) and Mediterranean (1971). His rediscovery started in the sixties, when a generation born and nurtured with diasporan sensitivity had reached the majority of age. He passed away in Paris on December 16, 1972.

In a famous piece about Easter, he wrote:

“We wait for something.
“We reach little by little to a truth above intelligence. As a matter of fact, it is not possible to find a bigger force than the piety of the one who looked with compassion at the armored and burly horsemen surrounding his cross, at the high priests believing themselves to be wise and brave, and at the judges who just carried a stone instead of a heart, a stone that, however, is destroyed soon.
“It is not possible to find something stronger in man than that noble selfishness, which rejects vulgar egotism and injustice, jealousy and malice, tyranny and judgment, arrogance and savagery.
“The Armenian has the heart capable to feel all these, although that heart is fatigued from clashing with the stones, it is grievous and wandering. He waits for all that. We know that we cannot answer to evil with goodness anymore. But all those are the needs burning our intestines.
“We know that all beautiful words pass. But we love all beautiful things.”

Several volumes of Sarafian’s writings, both of poetry and prose, have been collected and published since the 1980s. One of his most influential essays, The Bois of Vincennes, first published in the monthly Nayiri of Aleppo in 1947, was posthumously reprinted as a book in 1988. Since then, it was first translated into French (1993) and recently into English (2014) by Christopher Atamian.
Posted by Armenian National Education Committee at 2:29 PM