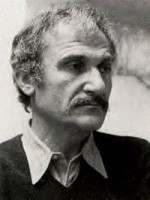 Jansem, a recognized French Armenian painter, was born Hovhannes Semerdjian on March 9, 1920, in Sölöz, a village near Brusa, nowadays Bursa, in northwestern Asia Minor (Turkey), which was also the birthplace of the famous writer Hagop Oshagan.

The Semerdjian family fled in 1922 to escape the massacre and deportation of Greeks and Armenians undertaken by the Kemalist movement in Asia Minor. They settled in Salonica (Greece), where Hovhannes spent his early childhood. After the death of his father, he moved to France with his mother in 1931. They settled in the suburban town of Issy-les-Moulineaux, one of the traditional concentrations of Armenians around Paris.

He broke the bones of his foot in an accident and had to spend three years in the hospital. From 1934-1936 he attended a variety of evening classes in Montparnasse and the Marais, in Paris. He met painter and teacher Ariel Ajemian, who taught him to draw, but he found his grand revelation in the works of Picasso.


In the 1950s Jansem won many awards in France and Mexico, and was decorated with the Order of the Arts and Letters of France in 1953. For the next half a century, he would have exhibitions in Paris, New York, Chicago, London, Tokyo, Rome, Brussels, Lausanne, Beirut, and other cities, and many of his works were acquired by European and American museums and private collections. He had the exceptional privilege of having two museums dedicated to his work in Japan during his lifetime (1993 and 1997). He visited Armenia in 1973 and again in 2001, when he donated his series of 34 paintings, “Genocide,” to the Armenian Genocide Museum-Institute. He was decorated with the Mesrob Mashdots award and received an emeritus doctorate from the National Academy of Sciences of Armenia in 2002. In 2003 he was ordained a Knight of the French Legion of Honor.

Jansem passed away on August 27, 2013, at age 93, in Saint-Aignan-sur-Cher, in central France.
Posted by Armenian National Education Committee at 3:36 PM