Zabel Asadour, also known by the pen name Sibil, was one of the few Armenian public women who reached recognition in her lifetime as a writer, but more importantly, as an educator and spokesperson for women. 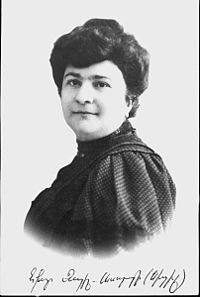 She was born Zabel Khanjian on October 8, 1863 in Scutari, an Armenian-populated district of Constantinople. She received her education at the Armenian schools of the area and graduated from the Scutari Lyceum in 1879. Together with her eight classmates and with the guidance of her mother and aunt, she was among the founders of the Nation-Devoted Armenian Women Society (Azkanuver Hayoohyats Unkerootyoon), an organization that supported the construction, maintenance, and operation of a network for schools for Armenian girls in the Ottoman provinces. In the second session of the Society, young Zabel showed her maturity, when she declared: “Let’s work to avoid being in debt with the nation and humankind, to make our sisters in the provinces get the light of education, to have the female gender have a place in humankind… Many people say and will say that you cannot succeed, however, which big work has succeeded in its first attempt; if we do not succeed, at least we will have set the foundations and someone else will perfect it…”

In 1882 she married lawyer Garabed Donelian, with whom she had a daughter. From 1882-1889, they lived in Bilejik, Brusa, and Ankara. Khanjian worked as a teacher and opened schools, while contributing poetry and articles to the Armenian press in Constantinople under the synonyms of Anahid and Sibil, which she would finally adopt. After 1889 she returned to the Ottoman capital. In 1891 she serialized in the newspaper Arevelk her novel The Heart of a Girl, where she espoused her progressive views about the advancement of Armenian women.

Sibil co-edited the Masis journal with writers Krikor Zohrab and Hrant Asadour (1862-1928) from 1892 onward. She also wrote for other periodicals contributing literary works (poems, short stories, plays) and essays on women issues, education, and literature. In 1894 the Women Society was shut down by the Ottoman government, and it would only reopen in 1908, after the Young Turk revolution and the restoration of the Ottoman Constitution. Meanwhile, in the 1890s Zabel Donelian and Hrant Asadour had started a romantic liaison that would find its culmination after the death of Garabed Donelian in 1901 and their marriage in the same year. Sibil would have a daughter from her second marriage. In 1902 she collected her romantic poems in a volume entitled Reflections. She was also an accomplished translator of French poetry.

For the next decades, she continued her educational work as a teacher in the Esayan and Getronagan schools, as well as the Hamazkyats School and local British and French schools. Among her students were famed art historian Sirarpie Der Nersessian, journalist and feminist writer Haiganush Mark, actor Vahram Papazian, and many other important names of Armenian culture.

Together with her husband, an expert of the Armenian language, she wrote grammar and language readers that went through many reprints and remained in use in Armenian schools for many decades. In her twilight years, she collected her short stories in a volume, Souls of Women, published in 1926. Her seventieth birthday was marked with great pomp in Istanbul, Cairo, Alexandria, Paris and Plovdiv (Bulgaria) in 1933.

Zabel Asadour passed away on July 19, 1934, in Istanbul, and was buried at the Armenian cemetery of Shishli.
Posted by Armenian National Education Committee at 3:00 PM