Karen Demirchyan was a noted name in post-Stalinist Soviet Armenia and held the leadership of the republic until the beginning of the Karabagh movement contributed to topple him. He would reinvent himself as a politician in post-Soviet times for a brief period until his murder. 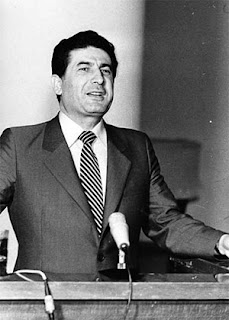 Demirchyan was born on April 17, 1932 in Yerevan, in a family of employees. He lost his parents when he was still an infant. After graduating from the school “26 Commissars,” he chose a career in engineering and studied at the Yerevan Karl Marx Polytechnic Institute (now Yerevan State Engineering University) from 1949-1954. After graduating as mechanical engineer, he worked briefly for a research institute in Leningrad, and in 1955 he returned to Armenia and joined the Yerevan Electrotechnical Factory. He became a member of the Communist Party in 1954 and soon rose to the position of secretary of the party committee in the factory.

His political career was in progress. In 1959 he was sent to the higher party school of Moscow attached to the Communist Party of the USSR, which was a prerequisite to climb to higher echelons, and he graduated in 1961. He returned to his former workplace as chief engineer and later director. In 1964 he became second secretary of the Yerevan party committee and joined the secretariat of the Armenian Central Committee six years later.

Demirchyan replaced Anton Kochinyan as first secretary of the Armenian Communist Party in November 1974 and he also became chairman of the Armenian Supreme Soviet in 1976. During his fourteen-year rule as party boss (he was one of the longest holders of the position of first secretary), Armenia was prosperous by Soviet standards, with its economy helped by semi-legal and illegal businesses. Various important public works were finished and opened during his tenure: the Zvartnots airport in Yerevan and the Shirak in Gyumri, as well as airports in the border zones; the first section of the Yerevan Metro (subway); the atomic central of Armenia, in Metzamor; the sports-concert complex on the hill of Tsitsernakaberd; the Arpa-Sevan tunnel. Several important factories and highways were also built. On April 23, 1975, for the first time in the history of Soviet Armenia, Demirchyan officially condemned the Armenian Genocide on behalf of the leadership of the republic. Thanks to his efforts, an article that declared Armenian as official language of the republic was reinstated in the new Constitution of 1978.

At the beginning of the Karabagh movement in 1988, Demirchyan tried to persuade the demonstrators to be patient. However, his middle course did not please either side, and he was forced out of office by Moscow authorities in May 1988.

He practically disappeared from the political scene, and after the independence of Armenia he became president and executive director of the Hayelectramekena (Armenian Electrical Machines) from 1991-1999.

A decade after leaving politics, he made a surprising comeback. Nostalgia for his era gave him momentum to try a run for the presidency as a non-partisan in the elections of March 1998. He managed to garner 30 per cent of the votes in the first round and 40 per cent in the second-round run-off against the eventual winner, Robert Kocharyan. He later formed the People's Party, teaming up with Defense minister Vazgen Sargsyan’s Republican Party to form the Miasnutyun (Unity) alliance and contest the May 1999 parliamentary elections.

The alliance won with 43 per cent of the vote and the majority of parliamentary seats. This gave the country the first chance of some stability since independence. Demirchyan was overwhelmingly elected speaker in June 1999. Four months later, on October 27, 1999, he, Sargsyan and six other politicians were assassinated in the Armenian Parliament by a group of gunmen who stormed the building in a move whose ultimate motives and driving forces have not been clarified.

Karen Demirchyan is buried at the Komitas Pantheon, located in the city center of Yerevan. One of his two sons, Stepan Demirchyan, succeeded him as leader of the People’s Party. The subway system, the sports-concert complex, a school, and a street are named after him in Yerevan.
Posted by Armenian National Education Committee at 12:00 AM