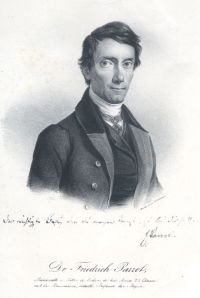 J. J. Friedrich W. Parrot (1792-1841) was a German naturalist and traveler. He was born in Karlsruhe, and studied medicine and natural science at the University of Dorpat (now Tartu), in present-day Estonia, then part of the Russian Empire. In 1811, at the age of nineteen, he undertook an expedition to Crimea and the Caucasus with Maurice Engelhardt.

Parrot undertook another trip, this time to Georgia and Armenia, in 1828. Eastern Armenia had been recently conquered by the Russian Empire after the Russo-Persian and Russo-Turkish wars of 1826-1828.

His aim was to reach the summit of Mt. Ararat (16,945 feet). He established his base camp in Arguri (Akori), and set to his mission. It was not an easy task, especially in those days when mountaineering was not well-developed. He made two attempts, and he barely escaped a deadly fall in one of them.

The third was the charm. This time, too, the climb was difficult. “The newly fallen snow which had been of some use to us in our former attempt, had since melted, from the increased heat of the weather, and was now changed into glacier ice, so that notwithstanding the moderate steepness of the acclivity, it would be necessary to cut steps from below,” he wrote. 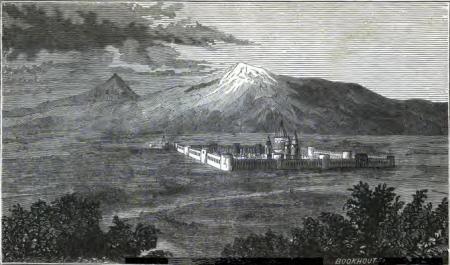 Finally, on September 27, 1829, after overcoming a violent snowstorm, “before my eyes, now intoxicated with joy, lay the highest pinnacle (...) and at about a quarter past three (...) we stood on the top of Mt. Ararat," he wrote. Parrot and his five companions, two of them students from the University of Dorpat, had made the first modern ascent of the mountain where it is traditionally held that Noah’s Ark had come to rest. He did not claim to see the rests of the ark, considering that the ice was 300 feet thick.

The climbers remained 45 minutes on the peak. A deacon from Holy Etchmiadzin, who had made the ascent in his habit, was among his companions; he planted the cross they had brought and then filled a flask with Ararat ice. After a prayer meeting, Parrot poured a libation for patriarch Noah.

The ascent was an event of importance, despite Armenian assurances that Ararat was unconquerable: “Put an Armenian on the summit of Ararat and he will still cling to the idea that it is unconquerable,” wrote Parrot. However, even more important for the history of Armenia culture was the encounter of Parrot with the deacon from Holy Etchmiadzin. The latter was no other than twenty-year-old Khachatur Abovian (1809-1848), a founding name of modern Armenian literature. Parrot was impressed by the intelligence of the young Armenian and made arrangements so he could enter the University of Dorpat. Abovian would stay six years at the university (1830-1836), which would become a magnet for Armenian students throughout the nineteenth century; his period of studies would be crucial in his life and his literary production. His protector would pass away five years after Abovian’s graduation.

Parrot wrote about the climb in a book in German, also translated into English (Journey to Ararat), but he was greeted with skepticism. Less than half a century later, British historian and explorer James Bryce would climb Ararat again and vindicate Parrot.
Posted by Armenian National Education Committee at 12:00 AM