At the beginning of the twentieth century, the lyrical production of Vahan Terian marked a new era in Eastern Armenian poetry. He was hailed by Hovhannes Tumanian as the most original poetical voice of his age, and his works closed the first period of modern Armenian literature.

His real name was Vahan Ter Grigorian. He was born on January 28, 1885 in the village of Gandza, in the region of Akhalkalak (Djavakhk), today in Georgia. He departed to Tiflis, where his elder brothers were studying, in 1897. He learned Russian with them and prepared to enter the Lazarian Oriental Institute in Moscow. He was admitted in 1899 at the Institute, where he met and befriended several young people who would become important public and literary figures, such as Alexander Miasnikian, Poghos Makintsin, Tsolak Khanzadian, and others. He graduated in 1906 and entered Moscow University. 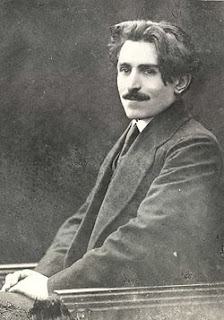 However, Terian had already engaged in revolutionary activities, as a sympathizer of the Bolshevik branch of the Russian Social Democratic Party. Soon after entering the university, he was arrested and briefly jailed in the prison of Butirka in Moscow.

After his liberation, he published his first volume of poetry, Twilight Dreams, in Tiflis (1908). It was very well-received by readers and critics for its originality. Sadness and pain, spring and love, the homeland and its fate were some of the markers of his poetry, which became the basis for many songs still interpreted today. He married Susanna Pakhalova in 1911 and published the first volume of his collected poetry, titled Poems, in 1912, where he gathered also works written after 1908. He left Moscow University in 1913 and went to St. Petersburg University, where he majored in Oriental Studies.

His wife died in 1916 after giving birth to a daughter, who did not survived. In the same year, the first signals of tuberculosis appeared in the poet. Terian went to the Caucasus for treatment, but the first Russian Revolution (March 1917) prompted him to abandon the region and return to St. Petersburg. He became a close collaborator to Stalin, the future strongman of the Soviet Union.


Terian participated actively in the second Russian Revolution of November 1917, led by the Bolshevik Party, and the civil war that ensued. As Armenian representative at the Commissariat of Nationalities led by Stalin, he participated actively in the writing of the decree on Western Armenia that was issued in January 1918 and proclaimed its freedom of self-determination. As a member of the Central Executive Committee of Soviet Russia, Terian was assigned a mission in Turkestan in late 1919, but his illness had gotten worse and the poet was forced to stop in Orenburg, in Russia, where he passed away on January 7, 1920 at the age of 35. His daughter Nvard, fruit of his relationship with Anahit Shahinjanyan, was born posthumously, in April 1920.

The memory of the poet has been evoked in July in his birthplace with a “Day of Terian Poetry” since 1967, which gathers thousands of admirers every year.